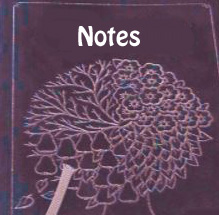 I promised to adapt this set of questions for my original work so here it is.

1 What made you start writing original stories, poetry, etc?
My first ‘work’ was a play performed by our local Brownie troop. I was five, and because I had written it I was allowed to join the big girls and be onstage. I think this must have gone to my head… I continued with plays, poems and stories until I left uni. Working as an English teacher meant producing work as a ‘role model’ for pupils, and I had neither the time nor the creative energy left to write anything else. When I took early retirement, one story was already in my head so I was itching to get to the keyboard.

2. Which of your own works have you reread the most?
I think sections of my Living Fae series. The story started in a ‘muse’ journal on LJ and by the time I decided on publication it needed a great deal of collection, collation, and decisions about what to include. As a result, I read and re-read various parts till I almost knew them by heart. At first, they were a pleasant surprise as I’d forgotten quite a lot. Later, I just wanted to get them sorted out and sent off to my editor.

3. Describe the differences between your first published work and your most recent.
When I decided to self-publish I used two novellas and a collection of three short stories as ‘practice’. So they were comparatively short. They were all based on legends and fairy tales, twisted into fresh forms. I was lucky enough to have seriously good editors and I learnt a lot from them.
My most recent publication was a short story – a contemporary romance. I wrote it some time ago, initially for a prompt in a writing group then, in a longer and edited version, for inclusion in a now defunct online zine. I decided to publish it myself and it went through a further editing and formatting process until I was satisfied with it. It has no fantasy and no connection with fairy tales.

4. Do you think your style has changed over time? How so?
I think and hope I use different styles depending on the kind of story I am telling. For example, my novella The Lord of Shalott, and the first volume of Living Fae are told in first person. I write novels, novellas, short stories, flashfic and poetry. I also write reviews and critiques. Obviously I need to use varied styles for all these. I don’t think my style has changed much in recent years; it has changed since I was a teenager, of course, but that’s to be expected.

5. You’ve posted a work anonymously. How would someone be able to guess you’ve written it?
As I said in the fanfic meme with the same questions, I once did this when the online writing group suggested we all write a flashfic in the style of my Living Fae material. Nobody was able to guess who had written what; I assume part of the reason was the choice of similar subject matter, characters, etc. Beyond that experiment, I can’t think how anyone would guess I had written something unless I included locations that people who know me know I’m familiar with.

6. Name three stories you found easy to write.
No real answer to this.

7. Name three stories you found difficult to write.
All writing is easy for me. It’s the editing, proof reading, formatting, etc. that causes headaches.

8. What’s your ratio of hits to kudos?
This was a fanfic question and I assume I need to consider ‘success’ as a writer. The world is drowning in self published material and I am not alone in sinking without much of a trace. My royalties about keep us in pizza and we don’t eat that every week. They also cause intense irritation to me when my tax returns are due. Most people who both like fantasy and actually find my books are complimentary, but too few find them! The same applies to my fanfic and I think the bottom line is just that I’m completely hopeless at marketing.

9. What do your fic bookmarks say about you?
Another fanfic question (specific to AO3) so I’ll refer to my to-be-read list instead. I read widely and voraciously, and at any one time you’d find mainstream novels, genre novels, short stories, poetry, and non-fiction in the queue. I think it just says I like reading! I also keep a record of e-books I’ve read, partly to stop myself re-purchasing them and partly so that I can recall the titles and authors to recommend to other people. That list says I like history, fantasy, mm romance, crime, biography, science (especially the natural world), finance, politics, and cookbooks.

10. What’s a theme that keeps coming up in your writing?
Culture clash, which is something that interests me.

11. What kind of relationships are you most interested in writing?
I have a tendency to focus on mm romantic relationships, though not to the exclusion of anything else.

12. For E-rated fic what are some things your characters keep doing?
I will assume we are talking about books that would be suitable for general audiences. That means my Skilled Investigators series, and as the name implies, the characters keep finding crimes and mysteries to investigate. Other than that, like anyone, they eat, sleep, talk, etc.

13. Name three favourite characters to write.
1. Harlequin, the main character in Living Fae. I call him my muse and he lives in my head and tries to influence all my writing.
2. Genef, the main character in Skilled Investigators. She is training as a detective and I like both her attitude to her work and her ability to question herself. She doesn’t live in my head, and although female, has almost nothing in common with me.
3. Scratch, the dragon who helps Genef in Skilled Investigators. I love writing from a dragon’s point of view, thinking how he might see human and elf behaviour and what he might say about it.

14. You’re applying for the [fanfic] writer of the year award. What five works do you put in your portfolio?
I’d have to think about things that are published somewhere, including my WordPress site. My work wanders around between genres and I don’t think they’d ever be regarded as award material for original writing. However, if I had to put together a selection:
1. Lord of Shalott: a novella set in Arthurian legend and inspired by Tennyson’s poem The Lady of Shalott.
2. Growing up Fae: volume 1 of Living Fae, told in journal form by Harlequin, a modern fairy living on Alderley Edge in Cheshire.
3. Answering Amanda: a children’s story based on Harlequin’s little sister’s letters to a human child. This is ready to send to anyone who asks for it using the information at the end of volume 3 of Living Fae. It was, in fact, the springboard for the entire world/series.
4. The Zoo: one of my poems, based on an actual day at Chester Zoo. It’s on my WordPress site. I might create a volume of poems to put on Smashwords; poems always get more ‘likes’ than anything on WordPress.
4. The Scroll: volume 1 of The Skilled Investigators and the one that introduces Scratch, the dragon.