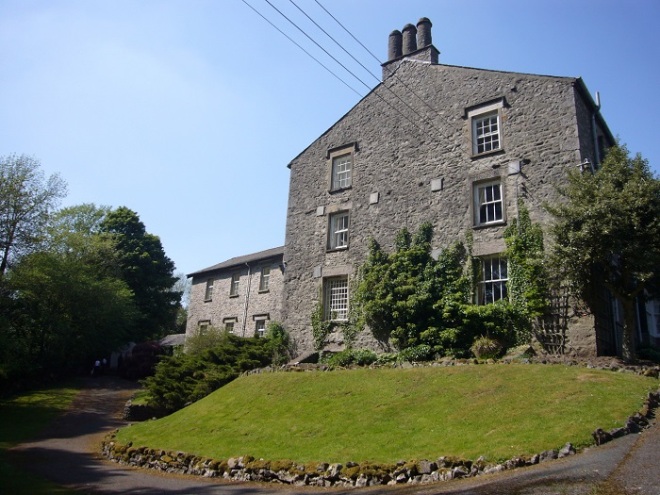 Last weekend I finally managed to watch Sally Wainwright’s ‘To Walk Invisible’ which I had saved on iPlayer and which was about to be withdrawn even from there. I had put off watching, thinking I knew the story backwards, forwards and upside down and would be bored by two hours of it. However, from the first few moments I was absolutely hooked and really on edge at the exciting parts, even when I knew what would happen. It was brilliantly scripted, produced and acted. It also made me think of my own history.

The reason I am so familiar with the Brontë story is that I went to Casterton Boarding School for Girls which is the school (albeit in different buildings) Charlotte and Emily attended, together with their sisters Maria and Elizabeth who died of typhoid and whose graves are in the churchyard at Casterton.

To say the Brontë sisters and their works were shoved down our throats is the understatement of the decade, never mind the year.

You can see a brief history of the school if you Google the Wikipedia entry. It’s in a village of the same name on the edge of the Lake District, just outside Kirby Lonsdale. The sisters attended the school at Cowan Bridge in a building that is still there. Later, the clergy daughters’ school merged with a school for servants (housekeepers?) at Lowood, and together the schools moved into new buildings in the village of Casterton. (The three villages are not far apart.) Recently, the school merged with Sedbergh – a boys’ school – and so far as I can tell from my own visits and from those of friends/former classmates, the school we attended effectively no longer exists.

I am in touch with all my class with the sad exception of four who died (suicide, cancer, car crash and heart attack) so I have just over 30 ‘old girls’ to keep in touch with. It’s a bit like having 30 sisters who unfortunately don’t live in the same town. Because it was a boarding school, we were very much thrown into each others’ company, evenings and weekends, during term time, without any input from siblings or parents. There were house mistresses and matrons, and prefects, but we relied on each other. I was there from the age of 9 to 17. Think about it…There were in fact a few ‘day’ girls: the vicar’s daughters, and the doctor’s daughter spring to mind. But they were the exception.

We slept in dormitories, changing dorm from time to time. The largest I was ever in had 16 beds, and the smallest, 3. By the time we reached sixth form status we had 2-bed cubicles but these were separated by low walls and we could still talk to everyone. When we visited (as a class) for the millennium Founder’s Day celebrations we found that most girls were in 2 bed rooms and that a cluster of separated rooms was still known as a dorm.

We were divided into houses. The junior department was in a building called Brontë House and the houses within it were Lowood and Cowan – fierce rivals. The photograph at the head of this post is of Brontë House a few years ago before it was sold off for conversion to flats.

I was 9, as I said, and didn’t really understand all the fuss about the famous writers or the school’s history. We were taught to be proud of the connection and shown the graves. The senior school had portraits lining the walls of the main corridor and when we went there for assemblies etc. some portraits were specially singled out. There was the ‘founder’, William Carus Wilson, who was, we were told, the template for Mr Brocklehurst, and Miss Beale, who was very pretty (and very Victorian) during her time at Casterton and was the presumed model for Miss Temple. She later left and became the first headmistress of Cheltenham Ladies’ College. The school song, in those days, was ‘Jerusalem’ and not the many-versed history that is sung today (I have no idea whether that has survived the merger but I wouldn’t weep for it).

We were taken to the senior school when I was nearly 11 to watch Wuthering Heights – it was in episodes so clearly was on television (there was a projector with a big screen in the hall) but I have not been able to trace it. It might have been a repeat of an earlier series. Or perhaps BBC showed a film in weekly parts? I had no idea what was going on but developed a deep and abiding dislike not only of Heathcliff but of all the characters and indeed of the entire story. I honestly think we were exposed to it too young…

We read it of course, which simply served to increase my dislike. We also read Jane Eyre and at the time I liked it. I was a little older, I think.

Our route to school (and back at the end of term) was by train over the Pennines so we had a close relationship with the moors and fells where the sisters grew up and wrote. The same fells surrounded the school and we went on enforced walks at weekends and runs during the week. I was never sure whether to blame William Carus Wilson, the fictional Mr Brocklehurst, Charlotte, or Jane Eyre. I didn’t feel I could ascribe hockey or lacrosse to any of them but the games fields were in full view of the fells so there was still a feeling of connection with the history and the fiction.

There were occasional parallels between our universe and that of the sisters. I vividly recall a flu epidemic when we were all just bundled into the first available bed as they filled dorm after dorm and designated them as sick bays, so that denizens of different houses (the senior houses were called after ex-headmistresses) were all mixed in together. It was impossible not to think of Jane’s typhoid epidemic, which of course was based on Charlotte’s real experience.

We were encouraged to see ourselves as potential wives and mothers, preferably of good Christian men with whom we could spread the gospel and perform charitable works. If we were intelligent we could try for university but once graduated, there would be the same expectations.

There were, in my day, 250 girls in the school aged between 8 and 18, and there were 50 special places for the daughters of clergymen, with much lower fees than the norm. I was one of these recipients of a ‘clergy place’ and we were very aware of our status, and of the fact that our fathers got to know each other (and the vicar, who was the school chaplain) over the years. We were, we were told, the spiritual ‘descendants’ of Charlotte, Emily, Maria and Elizabeth. Anne was never mentioned; of course, she never attended the school. Branwell was never mentioned or if he was it was in hushed tones and I think we possibly conflated him with Heathcliff.

My home experiences in the school holidays involved living in a country parsonage rather like the one at Haworth though we had a washing machine – and an Aga. It was something else that made the Brontës’ life seem very close and personal.

I gradually read not only Wuthering Heights and Jane Eyre but also The Professor, Agnes Grey and The Tenant of Wildfell Hall. I think I like Anne’s style best of the three writers although I can see the literary merit in all of them. They were all surprisingly feminist for their time, especially since they were living in a country parsonage with very little contact with the wider world. Their characters were feminists of a kind, though I was amused when my daughter, reading Jane Eyre for GCSE, threw it down and declared that Jane was a wimp, always just reacting to events and never making things happen.

I have, of course, visited Haworth. A close friend lives near there. I have also visited the house on Dominica that was the original for the house where Mrs Rochester was supposed to have grown up in Jean Rhys’ Wide Sargasso Sea. I am familiar with all the countryside that provided the locations for the more recent TV series.

I feel as though perhaps I ‘own’ Jane Eyre (or perhaps it owns me?) in a way that doesn’t occur to me with other books. It is by no means my favourite ‘classic’ – I would struggle to choose between Austen’s entire oeuvre and some of Trollope’s Barchester novels for that, and might even come down on Trollope’s side, with Ayala’s Angel in top place – not Barchester but wonderful. However, Charlotte ‘speaks’ to me, as a pupil at Casterton, as a student of literature, and as a writer. I don’t necessarily answer.

7 thoughts on “Walking in the footsteps of the ‘greats’.”