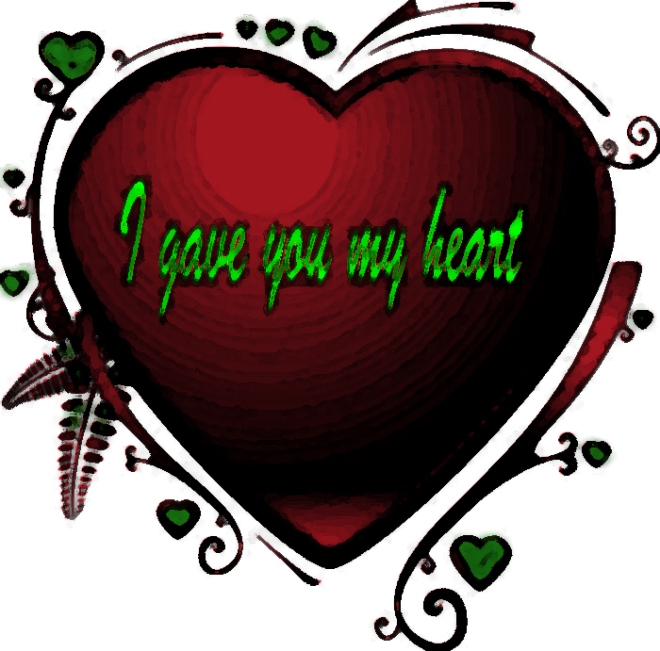 I remember it as clearly as yesterday, and you’re lying when you say it all passed in an alcoholic blur because of your new job and celebrating and so on. We were living together so it would have been a bit hard to fool me that much. Most of the time you were sober and a bit morose about having to move, to leave, even though you were pleased with the new status and even more with the new pay package.

I gave you my heart…

…right after the office party, on the way to the station. You were grumbling about having to pretend we weren’t together and I suggested we should stop pretending, let the world know, get married (it’s legal now, after all) and let the office busybodies have their nine days’ wonder, shock and salacious gossip. I said I would come to London with you, find a job somewhere, somehow, so that we could be together. We stopped under one of those huge streetlights on the station approach and you kissed me right there in public. Well, OK, there weren’t many public around and the ones there were were wrapped up in their own thoughts and destinations. But you kissed me without looking over your shoulder and I remember the sleet glistening on your hair under the light, the fiery coldness of your lips and the way my heart sang. Then you held my hand till we had to leave loose and run helter-skelter for the last train, laughing.

Neither of us had had that much to drink. We never did at those office things, too scared, I suppose, of giving ourselves away. So instead I gave my heart away and when we got home we fucked, or rather made love, till almost dawn.

The very next day …

It was Christmas Eve and we went into the village to buy a tree. We thought they might be cheaper, with less than twenty-four hours to go. We found a really nice little tree outside the supermarket, with a huge ‘reduced’ sign on it and we were just going to go in when Anna, that new girl from the typing pool, came past. We hadn’t known she lived in the same suburban village as us; she’d left the party early and of course we normally travelled in by car so we wouldn’t have run across her. She looked surprised then asked if we were together, with one of those smirking, knowing looks that some people seem to find appropriate. I was just saying yes, proud and dizzily happy when you said no, we were just flatmates. I felt the bottom drop out of my world.

We didn’t even decorate the tree and it just stood there all dark and bare till I threw it out on New Year’s Eve, tired of the needles dropping on the carpet, dry and spiked like my thoughts.

You left on the Sunday night and you tossed me your keys without a care in the world.

I was surprised to see you, pleased for you to hear about the promotion and the return up north, but not impressed that you seemed to think I’d just have been waiting all year, like some kind of doll you can throw into a box and take out again when it suits you. You were never that great a ‘catch’ despite the inflated salary. I could always have found someone else but we were good together or at least I thought we were. You didn’t. obviously.

He’s already asked me privately and he’s arranged this romantic public proposal under the mistletoe at his mum’s house. They know, too, so there won’t be any outcry, just lots of people pleased for us. He’s really dependable, and not bad-looking. I’m going to be happy.

But sometimes, very privately, I just wish it was last Christmas all over again.

(I wrote this a few years ago to a prompt from a writing group. I’ve tweaked it slightly to bring it up to date. It’s a kind of homage – and maybe we all wish it could be last year and 2016 could be re-run with edits?)