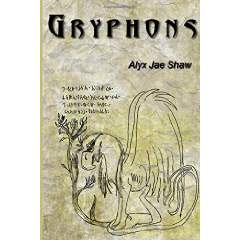 I was lucky enough to read the first draft of this book and loved it then. I bought the ‘polished’ and extended version when it came out. The author, who has published with various Indie publishers, couldn’t find a home for this so published it on Lulu. As a result, the print version is quite expensive for a paperback but is worth every penny. I promised a review, and must state straight away that although I know the author online, I have paid full price for the paperback book and the review is completely impartial. However, I would recommend the e-book version for anyone who is either poor or not sure!

Gryphons is a difficult novel to categorise. It has moments of almost unbearable poignancy, a lot of humour, quite a bit of violence and some gripping plot arcs. I found myself skimming ahead to check whether some of the characters to whom I’d given my heart survived to the end. It was no good relying on the first version – the author changed quite a lot and I couldn’t be sure.

Some reviewers have called it a young adult book and some refer to it as a story of coming of age. It has those elements and much of the narrative is seen through the eyes of Dahlia, a teenager. This gives it a freshness that lets the reader look at the world from the perspective of one who is a native but not yet prepared to accept everything she is told.

On the other hand, it’s a story about a rock band, albeit one on another planet, formed in the aftermath of war: a story of love, friendship, prejudice, betrayal, loyalty and, above all, survival.

And on the third hand, it’s pure sci-fi, set on a brilliantly realised world and given the clever ‘frame’ of a visit from people (mostly musicians) from Earth for a festival.

The world of Sferkkaa is still suffering the ravages of invasion and brutal alien occupation. Somehow or other they have picked up radio signals that introduced them to Earth music and the idea of rock bands has taken off like wildfire, giving excitement and the cult of celebrities to a population that needs better housing, more food, and perhaps books but can’t get them any time soon. The focus of the book is on the most famous band, The Mortified Gryphons.

The five band members were all fighters with the resistance. They are typical, perhaps stereotypical celebrities but they are also world-weary ex-military. In the course of the story they meet and befriend teenagers, including a young musician, a visitor from Earth and a schoolgirl. They also experience sickness, worry, terror, love and hope. They compose, practise, play and listen: music fills the story. And despite the fact that they are rich, there is no more food for them to buy than there is for the rest of the population.

One of the parting shots of the defeated invaders was to distribute a poison that killed most of the women from babies to grandmothers. So all families, even non-combatant ones, have known loss. The few women and girls who survived are treated with great respect, unless, like Dahli, they manage to break the law. Once it is realised that children grown in vats suffer all kinds of problems there are scientific efforts to enable men to carry babies. However, carrying a baby to term places huge stresses on the males who choose to do it, and is not something to be undertaken lightly.

There are all kinds of interactions between Earth people and Sferkkaans that call into question our notions of what is alien. There are also other ‘aliens’, imported from yet other planets, giving rise to complex questions of prejudice and what it means to be ‘human’.

This is a long story (700 pages in the paperback version) with unforgettable people and a beautifully detailed world. The tapestry of Sferkkaa is woven slowly and seamlessly until by the end the reader feels they have visited the planet and know its landscapes, its cities, its flora and fauna and its various climates. The philosophical questions that underpin the story are deftly placed in the course of events, with the actions and reactions of the characters speaking louder than any argument. The characters are intensely real and the reader is invited to share their physical and mental suffering, hoping against hope that things will turn out well for at least some of them. Nothing, in this respect, can be taken for granted but the ending is satisfying, and we can leave Sferkkaa with hope for the future.

Altogether, this is science fiction at its best, showing us an alien world with a story line that helps us to set our own behaviour in context, with a focus on fascinating individuals against a backdrop of technical change and another planet. It is beautifully written. In a book this length I would expect some editing flaws and typos, but they are very few and far between; I have seen more in books edited and published by the big publishing houses. The style is assured, the plot structure is excellent and the descriptions of everything from scenery to emotions are amazing, engaging the reader in an intense experience of a year in the life of another world.

Go and buy it. Go and tell your friends about it. You won’t regret it!

One thought on “Gryphons: a review”