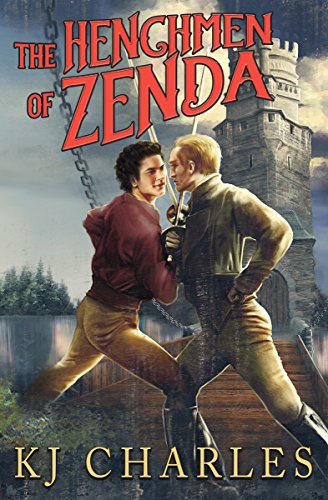 I recently re-read a book that had appealed to me first time around – in my teens! The Prisoner of Zenda by Anthony Hope. I had and have no idea why I liked it so much. It’s a novel with romance and adventure set in a fictional small kingdom in Eastern Europe in Victorian times. The plot is unlikely and the characters are fairly two dimensional: the feuding royal brothers, the princess whose hand might solve the problem of succession, the Englishman who just happens to resemble the crown prince closely and also just happens to be near the royal lodge at the crucial time, and the men who support their masters.

I think perhaps the lure of the story is that whilst apparently set in our own world it actually transports the reader to a fantasy world where good and evil – and princes – rule. The Englishman, having saved the throne and the princess for his ‘double’ returns to the quiet life of an English gentleman so there is no immediately happy ending, just a distancing of the entire situation into the realms of fiction, and a suggestion of how the hero can tug at our heartstrings without ever getting the prize. Despite this, the book works.

Of course, the tropes it uses were not ‘tired’ at the time it was written (1894) and it must have caused quite a sensation among the readers it reached. The writing somehow appears fresh even today, and I found myself drawn firmly into the world of make-believe where a wicked step brother could imprison the heir to the throne and an intrepid trio of supporters could defeat him and his henchmen. The book is sold as a historical novel but of course it was nothing of the kind. It was set in the time at which it was written.

This brings me to the reason for re-reading it. KJ Charles recently published The Henchmen of Zenda. I enjoy her writing, recalled the original, and decided to re-read before embarking on her novel, so that I had some idea of the world she was writing about.

I thoroughly enjoyed The Henchmen of Zenda too. It’s basically the same story, but told from the point of view of a different Englishman, one of the supporters of the ‘wicked’ prince. The plot details his growing feelings for another of the henchmen. The same caveats apply: the story is so basically unlikely that the reader is advised to treat it as fantasy and most of the characters are two dimensional. The princes are both wicked in their own ways but we are never given details of their sins.

The story does, in this case, have a happy ending for the hero, who escapes from the fictional kingdom with his lover. Unfortunately, I disliked the hero and his romantic partner intensely and was therefore unable to celebrate their eventual romance adequately. (I should probably say that I didn’t particularly like Hope’s heroes either.) This is in no way a criticism of the book, which is a very well written and absorbing tale. I think it probably needs knowledge of the original to make it work well or at least to add layers to the enjoyment. However, I would recommend it anyway.

In both books the combination of romance, fantasy, and excitement is fascinating. We are taken into a fictional world that has more in common with mediaeval ballads than Victorian industrial and empire scenarios, and given a story full of sword fights, dungeons, betrayals and loyalties then returned to the end of the nineteenth century leaving Ruritania lost in the mists of time, somewhere that never really existed but that we almost wish was part of history.

Charles manages to let the reader think this is a retelling by Hope – her style is a brilliant echo of the original but with modern overtones such as the same gender love at the heart of the story. I know Hope wrote a sequel (Rupert of Hentzau) which is completely at odds with Charles’ narrative, but in such a fictional world I think both plots have equal validity.

Obviously, Charles is ‘playing in Hope’s sandbox’, something that is often done in the case of classics that are well out of copyright. This is not only permissible but to be applauded. We have only to think of a few examples: Pride and Prejudice and Zombies is a modern one as is the BBC Sherlock, and then there are things like most renderings of the Arthurian legend, and Shakespeare’s use of previous plays in his own portfolio. The author who retells an old favourite with a different twist, whether that’s in the plot or the characters, is adding to our cultural storehouse of dreams and memories. (If the original is still in copyright the ‘twist’ is called fanfiction, but that’s another subject…)

Altogether, I enjoyed my second trip to Hope’s Ruritania, and my first to Charles’ re-imagining. I’m so glad she wrote about the henchmen and re-introduced me to the romance of Zenda.