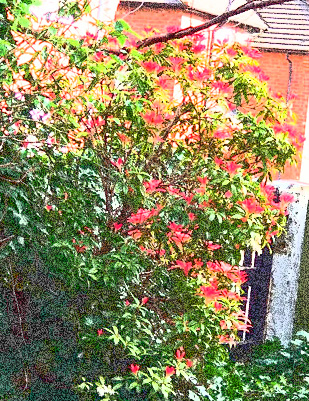 Dark Crystal: The Age of Resistance***** Stunning animation series – homage to Jim Henson. Also watched fabulous episode about the making of the series. Available on Netflix. You don’t need to have watched the original film to make sense of this – I’m going to watch it again later. This is a prequel.

Pangolins: the World’s Most Wanted Animal***** (BBC2) I love them and I’m so sad they are heading for extinction.

Witness***** – Harrison Ford in romantic thriller based around life in Amish community.

Vera Season2***** ITV seem to have temporarily given up treating us to the entire series, maybe because they hope we’ll pay for BritBox. (Not going to happen.)

A Monster Calls**** Rather frightening for kids and rather preachy for adults. Good animation etc.

Various SGA episodes – no stars because watched for fic I’m writing for Fandom Trumps Hate so more like work than entertainment… But overall I’d give the series 4 stars because the main characters hooked me.

The Truth about Traveller Crime (Dispatches)*** Raised as many questions as it pretended to answer. I was annoyed because Ch 4 are usually more politically aware.

Sporting Chance by Alexa Milne***** media problems beset a new relationship between a rugby star and a teacher in Wales.

Night and Silence by Seanan McGuire*****Vol 12 in the October Daye series. Perfect, as usual. No real spoilers but after the cliffhanger of the previous volume I was relieved to find the wedding is still going ahead.

Trial by Impotence by Pierre Darmon*****Looks at ‘the legal procedures for the dissolution of marriage on grounds of impotence’, particularly in France, from the middle ages to the twentieth century. Fascinating, horrifying, hilarious and sad.

Narrow Dog To Carcassonnne by Terry Darlington.***** What it says (with Monica, his wife and Jim, his dog). Must get sequel. Really funny and interesting.

The Making of the English Landscape by W.G. Hoskins***** fascinating and informative look at hedges, ditches, trees, etc. from pre-Roman times to just post-war Britain. Get the hardback if you can – nearly as cheap as the e-book and you’ll want to refer to the maps and study the b&w photos. Written just after WWII before motorways carved up the countryside.

Nobody’s Groom by DJ Jamison**** Nice as part of the Marital Bliss series but not very memorable on its own account because the characters are less interesting once Colby has got his head round being possibly gay. Well written as usual.

The ones I didn’t enjoy much but you might.

Alice Teale is Missing by H A Linskey*** Poor editing (Penguin, so I feel entitled to complain) – very repetitive and also features a fictional town in my native county. It doesn’t really work and I kept being distracted by its unreality.

The Lost Ones by Ben Cheetham*** well written thriller/chiller (better editing than Penguin) but with an unbelievable plot and characters – another one with a strange fictional town sort of dumped in the wilds of Northumberland (my home county).

New Year’s Resolutions by Crystel Greene*** an mm romance in Westminster… Weird view of British politics and especially Wales. If the queen is 100 how did Larry the Downing Street cat survive?? OK, it’s an AU but AUs need some supporting world building.

Thin Air by Lisa Gray*** (Jessica Shaw bk 1) Great concept – weird structure with flashbacks in victim pov. Didn’t like the style much though quite well written.

Suffer a Sea Change by Seanan McGuire***** sequel and counterpoint to Night and Silence (see Books). One of the exceptions – I don’t often give a short story five stars.

Bear and Fred by Iris Argaman*** Children’s story about wartime teddy bear. Not as good as Judith Kerr’s When Hitler Stole Pink Rabbit. Maybe a younger target audience but not sure in that case that enough context is given.

Man Crush by Isobel Starling*** So short I was just getting into it when it was over.

The Masque of the Red Death by Edgar Allan Poe*** Read prior to watching Margaret Atwood’s puppetry interpretation. (See TV) Too short, and the preaching distanced the horror.

The White Man’s Liberation Front by Bernadine Evaristo*** Present tense put me off. Clever but very aware of its cleverness. (Published in the New Statesman Spring Special.)

Abandoned
Murder by the Minster by Helen Cox. Lost me at redwoods by the Ouse in York. (Cornus or Dogwood doesn’t work, either…)

The City of Brass by S.A.Chakraborty (Daevabad trilogy bk 1) Djinns and demons and ghouls….

No stories to recommend this time, but I would like to mention some poetry. Please note that originally these were in the Sherlock fandom but have wandered off into their own delightful AU.
Five Poems from the Pen of Inky Quill by okapi **** https://archiveofourown.org/works/6848800/chapters/56437762