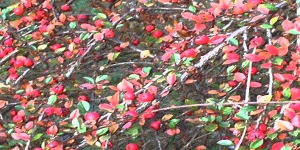 3Nov Skin Deep by Drew Zachary **** After reading a few books by him I know the author can be trusted to deliver a good story, well told. This is an erotic romance, set in a world where there are magic users. Razi possesses the power of glamour, and, after a childhood made miserable by abuse, is terrified that nobody will ever want the real person behind the magical beauty and glitter. It’s up to Dannan to prove Razi’s fears are groundless. The magic is beautifully described, and the gradual change to a normal relationship is both heart-warming and full of lessons for the reader which are all the better for not being too heavily presented. I would have liked a little more of both worlds, the glamorous and the prosaic, and a little less sex, but the publishers clearly wanted this to sell as erotica and the sex was at least well written.

6Nov Casket of Souls by Lynn Flewelling**** This is the sixth book in the Nightrunner series, and I enjoyed it, but thought it lacked some of the sparkle of its predecessors. The characters are as engaging as ever, and the plot is satisfyingly complex. The world building is detailed and competent. I thought the structure of the story was more prosaic and less exciting than the previous tales; the reader knew what was going on almost before the protagonists did, which reduced the tension. I also found the language at times less well-edited than is normal for this writer. I was engrossed by the story but somehow hope Ms Flewelling turns her attention to new characters for her next novel; I suspect she has, at least temporarily, run out of interesting things to say about Seregil and Alec, and also out of convincing mysteries for them to unravel. The pair still command affection but there seems to be little more to learn about them, and their country has perhaps had its fair share of national and city-wide disasters and triumphs. Whilst the plot hinges, as usual, on magic, the overall magic is waning. However, for anyone who has been following the series, this book is to be recommended. For anyone else, it probably wouldn’t make sense.

9Nov Gleams of a Remoter World by Fiona Glass*** This is a romance mixed with a ghost story set in Ireland on the coast of Galway where a ruined rectory (next door to an equally ruined church) is haunted by a murder that took place during the first world war. Investigative journalists are sent to cover the story and the results change their lives, bringing an end to their already rocky relationship then creating better futures for everyone. I enjoyed the location and the plot was mysterious enough, but I never really took to the main characters, and the confusing spirit manifestations were never altogether convincing. Well done but perhaps not totally to my taste. When it comes to paranormal tales, as opposed to absolute fantasy, I am hard to please.

13Nov Sidetracked by Henning Mankell*** The third of the Wallander books I bought. Unfortunately I read them in the wrong order and realised who the criminal in this one was before I should have done which rather reduced themystery element. The plots are quite intriguing but I think I shall avoid them in future because the constant short sentences have a staccato effect that I find very irritating.

15Nov Ashes of Honor by Seanan McGuire***** The sixth volume in the October Daye series. I absolutely adore this beautifully written urban fantasy series with the changeling private detective and all the forays into faerie. I can even forgive the American spelling of the title, because, after all, the author is American and the stories are based in San Francisco. This time, October has to stop an uncontrolled changeling teenager destroying the foundations of the fairy lands.The books need to be read in order otherwise a lot of things woudn’t make sense, but I can thoroughly recommend them to anyone who likes a hefty dose of magic and lots of different fae races mixed with a violent thriller-style plot and a helping of romance.

21Nov Half Moon Chambers by Harper Fox***** I love this author’s work. I was pleasantly surprised by the fact that there were no paranormal elements included. Recently, Harper’s stories have all had hints of ghosts or other beings and whilst I sometimes don’t mind at other times I find it interferes with the narrative. This was a straightforward romance between a cop and a witness, with plenty of police procedure, violence and suspense. When it went ‘live’ Harper asked her fans to take a survey about their e-book reading preferences, e.g. formats, online stores, etc. and I was one of the lucky ones picked at random to get a free copy of one of her books. As I have them all, I’ve been promised the next one!

28Nov The Scottish Prisoner by Diana Gabaldon***** I really like the Lord John Grey novels and novellas by this author but am less keen on the Outlander series for which she is so famous. Time travel in anything other than science fiction really isn’t my ‘thing’ and I find it very hard to suspend disbelief. So I approached this novel cautiously as it contains elements of both series. I was relieved to find that twentieth century Claire was missing from the plot except when her husband, Jamie Fraser, thought about her, and everything was firmly grounded in eighteenth century England and Ireland. The story was complex and fascinating and the writing was brilliant. That’s true of the Outlander books, too, but I’ll stick with John Grey and his military entanglements. Jamie, a Scot captured after Culloden, is a paroled prisoner under the control of John Grey, and is persuaded to help foil a new plot to put Charles Stuart on the throne. He agrees, because he knows (from Claire) that the plot will fail and he wants to spare his friends death and destruction.The growing friendship between the two men is overshadowed by Grey’s position as parole officer and also by his declaration (in an earlier book) that he loves  and desires Jamie. The characters are drawn in such detail that the reader feels they are real acquaintances by the end, but I suspect that a knowledge of the earlier books, at least the John Grey ones, is needed to make sense of some of the events. Highly recommended if you already know the series.

Some excellent reading this month!

5Nov Legend of the Seeker Season 1*** I’d read most of the books and wanted to see what a TV series had made of them. The world building in the books is fantastic and kept me reading, but the films used what looked like the same woods, the same studio villages and the same ‘palaces’ over and over again. The acting is wooden, the fights are badly choreographed, and the plot wanders away from the source material. This was cheap television. Something I disliked about the books was the emphasis on pain, but the worst volume was reduced to one episode. Something I liked about both books and films was the focus on friendship and family. I have season 2 and will probably watch it at some point. I know the series ended when the funding was withdrawn and does not cover all the books but I would be interested to find out how far it gets.I stopped reading the books but I know the show doesn’t get as far as the volumes I read, anyway.

7Nov The Dictator** This wasn’t as funny as some of Sacha Baron Cohen’s earlier work. It tried too hard and the humour became too heavy handed to make me laugh. The plot concerns a dictator who tries to keep his country from becoming westernised. There are echoes of North Korea, Afghanistan, Iraq and other states, but Wadiya is not a real place, just a symbol of oppression. During a trip to the US to talk to the UN the dictator meets an American girl and his world view gradually changes. He tells the US that they are the real dictatorship then goes home determined that his country will never fall into western ways. As a satirical concept it works, but as a film it is never great, and occasionally boring.

10Nov Firefly: Serenity.*** LoveFilm sent me Disc One, which had the film on it, and two of the series episodes. I suspect I should have seen some episodes before watching the film, as I never really engaged with the characters. It was quite an exciting sci-fi story with a lovely space ship, and a visit to a planet with echoes of the wild west but I won’t mind much if I never see Disc Two.

11Nov The 10th Kingdom** I really wanted to see this and missed the TV series so was thrilled when a friend gave me her copy of the eight episodes. I was disappointed. I had been lured with tales of fae characters in New York. In fact, after the first episode, most of the action takes place in the nine kingdoms of Fairyland with a father and daughter team from New York expected to save the day. The concept was good but the humour, the horror, and the romance were all heavy handed. The story was based around fairy tales such as Snow White, Red Riding Hood etc. with walk-on parts for nursery rhymes such as Little Bo Peep. I didn’t think it was nearly as good as The Brothers Grimm.

13Nov Inspector Montalbano Season 2**** I really enjoy the Sicilian locations and the glimpses of the Sicilian way of life. The main characters are very pleasing, too. There are flaws. The plots, which I believe are taken from novels, are convoluted and sometimes hard to follow, probably because they are condensed into hour and a half or two hour episodes. Some of the humour is also hard to understand via subtitles. However, I’ve been quite involved in watching the series and will probably watch the next season.

24Nov The Lincoln Lawyer**** A courtroom drama that turns into a thriller with a lot of twists and turns. Competent and engaging.

25Nov DCI Banks**** TV series. I’ve forgotten which season this was. It’s a police drama series with the main focus on Banks (Stephen Tompkinson) but with a good supporting cast. I love the Yorkshire locations and the attention to detail that makes this show so real and believable. I tried the books it’s based on but was less than impressed by the writing style.

28Nov The Young Victoria***** I was really surprised that I liked this film so much. I wanted to see it because of all the reviews but half expected it to be boring. The acting and direction were superb, and it was a lovely glimpse of Victoria’s youth and marriage. We have such firm views of the queen, coloured by time and hindsight and we forget that she was young once. This is a romantic film but it also shows a great deal about politics and about the relationship between the monarch and government. Highly recommended.

29Nov Secret State***** Four part Brit political thriller highlighting the links between the banks and the petrochemical industry versus the government of the day. Well acted and scripted. Interesting and intelligent.

A mixed bag of viewing this month with a couple of highlights at the end.

2 thoughts on “November reading and viewing”