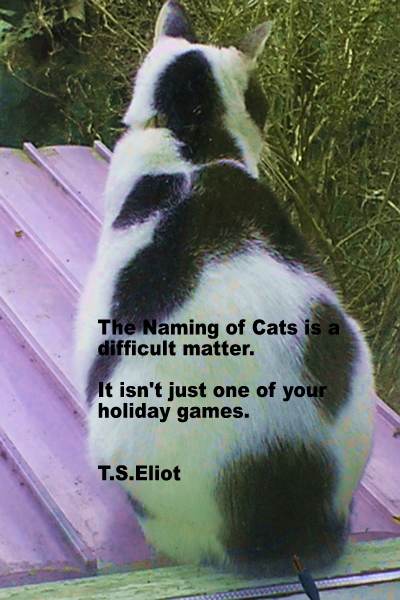 How do you choose names for your characters and your locations?

If you’re going to set your story in contemporary London (or any other city) half the problem (the geographical bit) is solved and then you can pick names from a telephone directory, mixing and matching so that Agnes Black and Colin Drake become Agnes Drake and Colin Black. As I’ve mentioned elsewhere you need to note the spelling of names because there are some that have various options (Stephen/Steven) and some that appear to have various options but are actually gender specific (Leslie/Lesley) and you are almost bound to get them wrong occasionally in your text; that’s the law of the great god Typo. Plus, it’s no good using a location like e.g. Chertsey if you don’t know it’s south of London and on the Thames. But generally, contemporary fiction doesn’t give rise to too many problems although you might want to check that your subconscious doesn’t come up with a name that in fact belongs to someone famous in fact or fiction (been there, done that and had to do a quick find/replace…).

If you have more exotic locations in mind you need to check the spellings and geography even more carefully but there are all sorts of helpful sites from Google Earth to Wikipedia to help you and there are lists of appropriate names (plus English transcriptions) for boys and girls in almost any language you might imagine and a few you didn’t know existed. Most of them give you the meanings as well.

You need to take care that you haven’t stolen names from other fantasy writers who have no doubt burnt a lot of midnight oil coming up with new and interesting names. You need to make copious notes about the names you choose, giving them some sort of history, noting the preferred spelling, considering the pronunciation… But all that is after you’ve chosen the names in the first place. Although some fantasy writers use a few names that sound as if they’re from ‘our’ world, most of do a lot of inventing.

It’s important that invented names should sound likely and not stupid. Rumpelstiltskin might succeed in a fairy tale but not in the average heroic quest tale. It depends, of course, on the type of fantasy. Modern urban fantasies or tales of vampires or shape shifters can use ordinary contemporary names. Vampires can indeed be called Edward or Hal. But what about aliens or supernaturals? They are not going to have been saddled with John or Mary, however convenient you think it might be. Nor can you chicken out and say you’ll call them that because their ‘real’ names are so difficult to pronounce or because you’ve decided to use the terrestrial equivalent. Your readers have already decided to suspend disbelief and imagine they are listening comfortably to an alien language so why should pronunciation be difficult? Nor is it helpful (to you) to use long phrases like ‘Born Under The Winter Moon’ because they take too long to type and you are going to be typing them regularly.

You really do have to work at it. It’s possible to create really strange names like G’narrr or  m’Lln but you’ll have typo trouble, I can assure you, and you still have to take care that they don’t sound too unlikely given the rest of your characters and location names. (This is a warning, not a prohibition.) If you’re writing about terrestrial supernaturals e.g. fae, you can use the names of less common flora and fauna. If your plot takes you to other planets you can still do that but make sure the names are seriously uncommon or add a few lines linking the name to a plant or whatever on the alien world.

Another possibility is to take ordinary names and alter them slightly. Annie becomes Anee, Mark becomes Maark or Tarc, and Virginia turns into Lergynia. Keep notes! Be careful that your subtle alterations don’t catapult the name into a realm with other meanings. Annie cannot become Anneal or Aneal; Mark shouldn’t turn into Bark or Lark;  Virginia would sound dreadful as Laryngia.

If you choose to alter names that are regional here, make sure all your characters have names with similar origins so that you don’t end up with too much of a mixture, unless you intend to go into great detail as to how your world has come to have a melting pot of people from different cultures.  I read one fantasy series where people who sounded vaguely Scottish lived just across the border from (and spoke the same language as) those with names that conjured visions of the Middle East; there was no explanation and it all jarred.

The same thing applies to other-worldly places or just wildly fictional ones. If you’re setting things on Earth you need to take care with local languages and usage. I have cringed at stories set in places like e.g.‘Altonhambury’ or ‘Byburghthorpe’, combinations that sound (and are) unreal. I’m pretty sure non-native writers make similar errors in stories set in e.g. India or China. If in doubt, use the slight alteration method for places, too. Make certain you haven’t inadvertently included geographical markers in your place names. For example, a tor is a hill in Brit English so a town on a plain with a name containing ‘tor’ might be fine for your invented world but will throw your terrestrial readers. You can, of course, steal a name you like and place it in entirely foreign geographical surroundings but be careful – check its history and meaning first.

Check that you’ve used a variety of initials. If all your characters have names beginning with G the reader will get confused and annoyed. It’s such an easy error to fall into and yet if you keep notes it’s easy to avoid.

The more research you do the more real your characters will appear in the final text.

I use a variety of methods. My fae characters have a mixture of names, mostly drawn from natural objects like plants or animals, but sometimes borrowed from humans in a somewhat random fashion. My fantasy people have names that are reminiscent of Earth ones but are altered slightly. Even then, I came up with Brianna (or Briana) only to find the name exists here. It’s pretty, and it’s uncommon, so I left it, but someone is bound to complain. For stories set in solidly terrestrial cultures (even fairy tale ones) I’ve done research.

It’s no good sticking pins in an alphabet or letting the computer invent things. Naming needs thought. I’m reminded of Eliot’s poem (and the musical lyric): The naming of cats is a difficult matter; it isn’t just one of your holiday games. As for cats, so for characters…

How do you do it?

12 thoughts on “The naming of casts (or characters).”